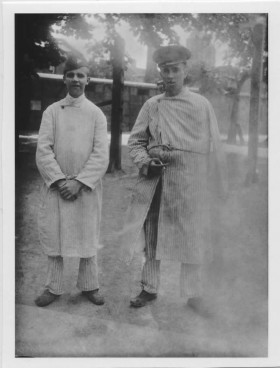 * The 14th battalion suffered heavy losses at Bullecourt in April 1917 when the brigade attacked strong German positions without the promised tank support. Neal was wounded and taken POW the same day as Bill DODEMAIDE. Bill was engaged in fighting during the first Battle of Bullecourt on 11 April 1917, which saw over 1,100 Australians taken prisoner, the largest number suffered by the AIF in a single battle in the First World War. We now know at least 2 were from Melton.

Mrs. John Neal has been notified that her son, Private Frank Neal, who was reported missing, is now a prisoner of war in Munser, Germany.

Frank Neal returned home to Melton on Wednesday last, after an absence of 26 months on Active Service. He was a Prisoner of War in Germany for 10 months, having been captured after a bad wound in the shoulder, the result of which he still carries a disabled arm in a sling; but the use of it may return later, with careful nursing and medical attention - his friends earnestly hope so. Pte. Neal states that his treatment whilst in Germany was "not bad," but the food served out was poor and insufficient - black bread, turnip tops, &c. The Red Cross parcels were thankfully received and kept many of them alive whilst in prison. Two other brothers (Keith and Jack) of this returned soldier are still on Service.

Empire Day was celebrated at the Melton school on Friday, when the School Committee and friends assembled to do honor to the occasion.
……..
Mr. J. F. Roo ,(H.T.) …... He extended a welcome to Private Frank Neal, an ex-pupil of the school, who had just returned seriously wounded, from Germany, where he had been imprisoned for nine months.

Despite the inclement weather on Saturday night, the Melton Mechanics' hall was well filled by local and district folk, who assembled to extend a welcome home to Privates Tom. Nolan, Frank Neal, G. Close and Tom Exell; also to say farewell to-Lance-Corporal Stanley Love, Privates Roy Monk and Norman Kinnersley. The platform was tastefully decorated for the occasion with greenery, flowers, and the Allied flags. Harmony was contributed by Misses Phyllis Emmett, Currie, Evans, Messrs. McLeish, Osborne and S. Hardy. The performers were all in excellent voice and had perforce to obey encores. The Chairman of the Recruiting Committee (Rev. S. Love) …….
….. Privates Close, Nolan and Neal responded in neat speeches, thanking the audience for the splendid reception given them.--The (Rev.) Lance-Corporal Love said he knew his enlistment was a surprise to many people, but he saw other married men obeying the call of Empire and he had no desire to shelter himself behind his clerical collar. He then spoke in his usual happy vein and gave some experiences of camp life.
To show the inequality of sacrifice in connection with the war, it is interesting to note that the whole family of Nolan brothers and Neal brothers enlisted. Three Nolans and Frank Neal have returned. Privates Joe Nolan and Keith and Jack Neal are still in the firing line.