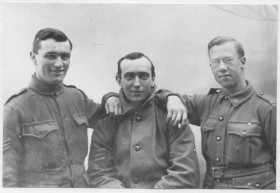 Other relevant information:
00/01/1921 Travelled to London via South Africa aboard Marathon with his wife

Despite the inclement weather on Saturday night, the Melton Mechanics' hall was well filled by local and district folk, who assembled to extend a welcome home to Privates Tom. Nolan, Frank Neal, G. Close and Tom Exell ; also to say farewell to-Lance-Corporal Stanley Love, Privates Roy Monk and Norman Kinnersley. The platform was tastefully decorated for the occasion with greenery, flowers, and the Allied flags. Harmony was contributed by Misses Phyllis Emmett, Currie, Evans, Messrs. McLeish, Osborne and S. Hardy. The performers were all in excellent voice and had perforce to obey encores. The
Chairman of the Recruiting Committee (Rev. S. Love) …….
….. Privates Close, Nolan and Neal responded in neat speeches, thanking the audience for the splendid reception given them.--The (Rev.) Lance-Corporal Love said he knew his enlistment was a surprise to many people, but he saw other married men obeying the call of Empire and he had no desire to shelter himself behind his clerical collar. He then spoke in his usual happy vein and gave some experiences of camp life.
….
To show the inequality of sacrifice in connection with the war, it is interesting to note that the whole family of Nolan brothers and Neal brothers enlisted. Three Nolans and Frank Neal have returned. Privates Joe Nolan and Keith and Jack Neal are still in the firing line.