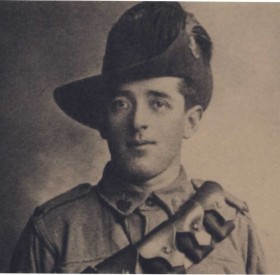 The recruiting meeting held, in the Mechanics' Institute here on Friday evening was well attended by both sexes. The proceedings opened with God save the King. Cr. Robinson (Shire President) presided. On the platform with him were Hon. Frank Clarke, M.L.C., Private A. T. Ozanne, and Sergeant McKenzie (a returned soldier), each of whom addressed the meeting, exhorting those present in every possible manner to enlist, and take up the duties for the protection of their people and country. When a call was made for recruits, the following five young men responded - H. Sawyer, E. Minns, H. Black, and two of Mr. P. Nolan's sons, the latter making four from Mr. Nolan's family, as two others are already at the Front. A vote of thanks was accorded to Mr. and Mrs. Nolan, and acknowledged. The addresses were listened to in the orderly manner due to such occasions. and each speaker was well received, and applauded, for his effort. Mr. Frank Clarke explained why he resigned from the Central Recruiting Committee, and the explanation, was well received. The proceedings were enlivened by patriotic songs from Mrs. Allen, Miss Scotson and Mr. Percy Butler, who enlisted some short time back.

. To show the inequality of sacrifice in connection with the war, it is interesting to note that the whole family of Nolan brothers and Neal brothers enlisted. Three Nolans and Frank Neal have returned. Privates Joe Nolan and Keith and Jack Neal are still in the firing line.